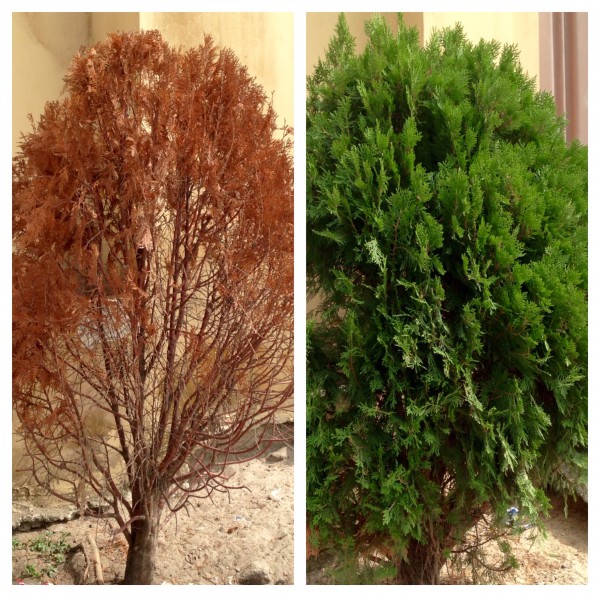 I have these pine trees all over my house (photo above), I love them for how they look like its Christmas all year round and for how green they are. A few weeks ago, I noticed how out of 4 that stand outside my gate, 2 were withering and 2 seemed fine. I mentioned my concern to the gardener who said he’ll sort it out and forgot about it. This afternoon, as I drove in from a meeting, I noticed the 2 trees again. I stopped to look at them and noticed how though the tree on the left is now obviously dead, it still keeps its shape (for now). It’s dead but in the shape of the living! And somehow that thought filled my heart with compassion.

It made me think of you or someone you know, maybe even someone really close. It made me want to say “hang in there, though it may not look like it, this too shall soon pass”. Yes, that situation that looks like it’s hopeless, that marriage that looks “un-saveable”, that child that has gone so wayward, that you have lost hope. The depression you feel deep down I’m your bones, that makes you feel like life may not be worth living. The lie you told that you have now been caught in and shamed by. The debt you owe that almost chokes you in your sleep or the loan shark who forces your car off the road just to give you a taste of what he can do…

In the shape of the living, while feeling anything but alive! I too have known that feeling, like the weight of the world sits upon my dainty shoulders, like there’s nowhere to turn. I remember this one time, my hubby had travelled to have a major surgery (I was pained that I couldn’t go and take care of him but we made the choice for me to stay behind because having saved for the surgery, we couldn’t afford for me to go as well). A day before the surgery was due, my son fell ill and had to be admitted in hospital (which meant I had to be in hospital with him) and in that time with the turmoil of both of them being quite ill, my dad had a car accident and broke some bones! I felt like “only me?” I didn’t even know what sins I had committed to warrant such an onslaught, not one after another, but at the same time! I know you’ve felt that way too or are probably feeling it now, the pressure is sustained… And you may be thinking something has to give! Something has to give or I’ll give! Thinking like the Yoruba’s say “that the day of death is the day of rest” and wishing it to come quickly…

Pardon me but I feel compelled to share, I too have known those feelings and somehow I have found help! I found help in the One who spoke to the wind, spoke to the dark that was without form and void and gave it life. I have found help in realising I don’t need to bear the burdens of my sins, yes I may still suffer the consequences, but the burdens, no! Someone took that off me. I found help in the realisation that I don’t stand alone, I have “a friend who sticks closer than a brother”, I have One who intercedes for me. Mostly I found help in knowing that I have been forgiven, for me, forgiving was hard. Whether it was forgiving myself or the ones who wronged me. And when the overwhelming thoughts of my sins seemed to rush like waves to consume me and mock me, telling me that I am unworthy of talking to my friend and brother, I remember that not only did He forgive, but He “cast it in the sea of forgetfulness!”

I don’t know how my dead tree brought about all these thoughts but I feel compelled to say to someone today, in Jesus I found help. In Him I found rest, in Him I found the missing piece of the puzzle that seemed lost so long ago! There’s no yawning hole begging to be filled anymore, there’s now purpose, joy, hope, renewed vigour and the feeling that “I can do anything”, that I was made for more and that I am here because there’s something I am meant to contribute to the world, even my pain and trees that die in my sphere of influence have a purpose. And I hope that by this post someone out there finds some solace!

Shalom and if you need to talk or share, you can leave a comment on this post or drop me a line at hajelsblogs@gmail.com. Stay awesome!

Join the conversation, I'd like to know what you think! Cancel reply